13 Sep 2021: Surabhi Lakshmi bagged the 45th Kerala Film Critics award for the Best Actress for her performance in the film Jwalamukhi. Prithviraj and Biju Menon shared the best actor award while, Samyuktha Menon shared the award for best actress along with Surabhi.

The first teaser from Anoop Menon and Surabhi Lakshmi starrer ‘Padma’ is out! The less than a minute teaser features Anoop Menon and Surabhi Lakshmi. The teaser suggests that they are playing a married couple in the film and the duo is having a conversation over a stained shirt.
The scene turns hilarious when the wife tells that she washed a luxe saree along with a shirt and she finds it difficult to spell the designer’s name. The husband helps her with the name and also corrects her by adding “Sabyasachi Mukherjee is he, not she!” The wife is now upset about her husband buying her a saree worth Rs. 65000 as it has stained the shirt! “ I better have bought 65 sarees for Rs. 65000 and worn it for 65 days!” she says.
The official teaser of PADMA was released on 22 May through Youtube by Mohanlal through his social media handle. Here is the link:
https://www.youtube.com/watch?v=8MP2cHr4IWM

Talking about the movie, the film’s director Anoop Menon, says that he always felt that a national award winning actress Surabhi has never got a chance to explore her acting caliber. “This film belongs to Padma out and out and Surabhi is the perfect cast for it,” he says adding, she will be seen in a get up which nobody would ever have thought of in her.

According to Anoop, Padma will give out a strong feminine statement. “There is a very bold statement that Padma makes without much ado. I am sure many will connect with Padma. She makes a few statements through the incidents that happen in her life,” he says.

Apart from direction and production, Anoop Menon also does a part in the film.

‘Food Path’ is directed by Jithu K Jayan and Ayyoob Kachery has crafted the story. The nine-minute long short movie narrates the story of a poor food delivery man who struggles to balance between the poverty, personal needs, and work commitments. The movie depicts how delivery agents turned saviours during the COVID lockdown.

One day, he comes across some unfortunate incidents while on duty to deliver food on his work routine. At the end, despite all his sincerity, he lands at the receiving end of harsh words. The closing makes us remember the proverb “The rich eat when they want, the poor when they can.”

The link for the movie is https://www.youtube.com/watch?v=rXl5JfSoXo0

25 September 2020: Surabhi Lakshmi launched her official Youtube channel. Named as “Surabees”, the channel will showcase a variety of videos that would include short-films, music videos, talk sessions in light spirit and those interesting simple things in life. 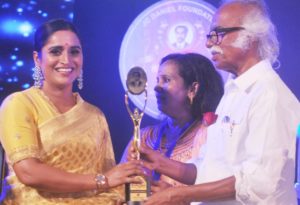 01 March 2020: JC Daniel foundation announced 10th JC Daniel Rajaratna awards. Surabhi Lakshmi has bagged the award for the admirable sincerity and integrity shown in the field of art, culture and the dedicated service given to the society.

Suraj Venjaramoodu, Indrans and media person R Sreekantan Nair are also among the ones chosen along. Awards were distributed on 28 February, in association with the program conducted to celebrate 28th birth anniversary of JC Daniel, at Ernakulam Town Hall.

Surabhi was awarded “Padmarajan Award 2019” by the Abu Dhabi Samskarika Vedhi & Abu Dhabi Malayalam Samajam. She received the award on Friday, 18 October in a function held at Abu Dhabi, UAE.

04 Oct 2019: It was an image anyone would jump at without a second thought, to ridicule. A man, seemingly drunk, inside Kochi Metro. The public memory might not have forgotten the incident of a tired, deaf and mute Eldo getting dubbed as a drunkard by someone who posted his image online, around the launch of the metro service.

Vikruti is inspired from the incident, with Suraj Venjaramoodu playing Eldo, Nebeesh Benson playing his son Basil and Surabhi Lakshmi cast as his wife Elsy, who is also speech and hearing impaired.

Surabhi Lakshmi has made her maiden directorial entry through a music video project.  This project is part of a series named “Pennaal” that has evolved from a women team. “Pennaal’ is the first of its kind in Malayalam Music Series that depicts the 5 stages of woman’s life. Succeeding the widely accepted first song ‘Baalyam’, sung by Shreya Jayadeep, the team has released its second song named ‘Kaumaaram’ (Adolescence).

Kaumaaram got released at 7pm on 26 July 2019 by the leading young actresses Miya, Anu Sithara, Aishwarya Lakshmi, Nimisha Sajayan and Samyuktha Menon in their respective Facebook pages simultaneously. The song is written by Shyla Thomas, music by Gayathri Suresh and sung by Dr. Shani Hafees. The first look poster of the video was released by the young actor Tovino.

From the Pennaal series, Kaumaaram will be soon followed by Yauvvanam (Youth ), Maathruthwam (Motherhood), Vaardhakyam (Old age ) and a bonus Ghazal track. Timesworld and Ayurdha Media House are the production banners. Muzik 24/7 is the Youtube partner.

Here is the youtube link for the video: Kaumaaram Video.
Times of India | Mathrubhoomi | Malayala Manorama

News18 paid respect to those Malayalis who brought Kerala to the global limelight with their vibrant contributions. The state chief minister Pinarayi Vijayan was conferred the Malayali of the year award, for his distinctive steps in various avenues. Surabhi was picked to be honored as Malayali of the year from the film and drama section. Writer M.T. Vasudevan Nair and actor Madhu were conferred with lifetime achievement awards. Governor P. Sadashivam distributed the title awards to the recipients.

The extraordinary stories and eternal characters born from the pen of legendary Malayalam writer MT Vasudevan Nair took life on stage. Renowned theatre artist, Prasanth Narayanan, paid the perfect tribute to Malayalam’s favorite storyteller through his play ‘Mahasagaram’, which depicted stories written by MT Vasudevan Nair and significant characters from them. ‘Mahasagaram’ was staged on Monday evening at the Tagore Theatre in Thiruvananthapuram. Surabhi essayed the role of legendary warrior and heroine Unniyarcha on stage.

Cochin Haneefa Award 2017 for the best actress was conferred on Surabhi. The award was instituted by the Cochin Haneefa Memorial Charitable Society, Kerala.

Kerala Box Office Awards are given to personalities chosen by people who cast their votes in the selection process. With a mind-blowing participation from people. Surabhi bagged the award for the best actress.

The Jury at the All Lights India International Film Festival gave Special Honorable Mention to Surabhi Lakshmi in the film MINNAMINUGU for her heart wrenching portrayal of a mother in distress, willing to sacrifice everything for her daughter.  All Lights India International Film Festival (ALIIFF) aims at providing a unique platform for global film industry to portray excellence in film making, aids to inspire, nurture and integrate the Indian Cinema industry thereby facilitating congregation of people and nations.

10 Sep, 2017 The 47th state films awards were presented at a gala function held in Thalassery on Sunday (10 Sep, 2017) evening.  Surabhi received the Kerala State Film Award (Special Jury Mention) on this occasion from the Chief minister Pinarayi Vijayan.
Ministers, MPs and MLAs from the district, film actor KPAC Lalitha, actor and MLA Mukesh and Chalchitra Academy Chairman Kamal were among others who attended.

Surabhi Lakshmi was declared the best actress to receive the Bharat Murali Award for the best actress in 2017. P. Ramakrishnan, Hon Speaker of the Legislative Assembly will give away the award at a ceremony in Kollam on 04 August.

The much awaited Minnaminungu movie is released in theatres today. Directed by Anil Thomas, Minnaminungu the FireFly is a Malayalam Movie which tells the story of a single mother in Kerala. The movie bagged the Special Jury Mention at the Kerala State Film Awards along with the National Award for the best actress in India. Along with Surabhi Lakshmi, it also stars Prem Prakash and Rabecca Santhosh in main roles.