Mukherjee said he was happy that the 64th edition of the awards represented a “microcosm” of India and celebrates the diversity of languages, customs, religions and culture. “Indian cinema and its diversity conveys the underlying spirit of brotherhood, tolerance, acceptance and co-existence. The inherent strength of unity in spite of diversity was our cultural heritage which was inherited through ages,” he said during the ceremony. 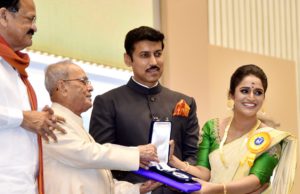 Surabhi was given the best actress award for her role in the Malayalam film Minnaminungu-The Firefly. She received the Rajat Kamal and Rs 50,000.

“I am very happy that I have won this award so early in my career. I am thankful to the jury and I am happy that regional cinema is being given its due,” Surabhi told PTI after accepting her award. 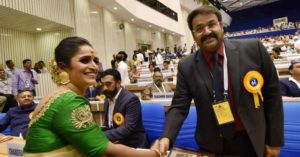 Veteran Actor Mohanlal shake hands with Surabhi at the ceremony 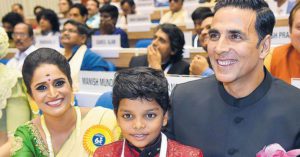 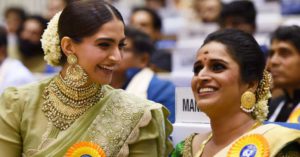